Have We Hit Peak VMware Community?

Lately, VMUG has become no stranger to controversy after dust-ups with rowdy vendors like Nutanix, and a website launch that was lackluster and fairly disruptive amongst a messy and fast-paced split from SmithBucklin (the original VMUG HQ outsourcer). Now they are dealing with a self-made mess after the announcement that VMUG is joining the Dell Technologies User Community (DTUC) community. There have also been ongoing issues that generally stay at a low, but steady boil, like the corporatization of the organization and the ridiculous “election” process for board members that only gives us members a simple yes/no vote on a full slate of officers. To anyone paying attention, VMUG is seriously hurting right now, and not only because of its own actions.

I’ve been a member of the larger VMware community from the very beginning.  I’ve attended every US VMworld (going back to 2004), and all but one of the US Partner Exchange events.  I helped start one of the early VMUGs in Omaha in 2006, and led it until 2008.  I’ve been a consistent and active member ever since, including a steering committee member the last year or so. I attended one of the first meetings that would later become known as “UserCon” (the Kansas City based Midwest Regional VMUG).  I’ve been to and/or spoken at many other VMUGs (both local chapter and UserCon) in Iowa, Indy, Connecticut, Minneapolis, Wisconsin, Dallas, and Houston, among others.  I’ve even worked with VMUG as a VMunderground sponsor.  I love talking to other VMUG members, and have had many, many discussions with different VMUG leaders, board members, and HQ employees on a wide range of topics.  So, needless to say, I’m very vested in the “vCommunity” and continue to support it any way I can (including VMunderground).

While I don’t think the relationship with DTUC is malicious or selling out the VMUG to Dell, I do think it’s a clear sign of a few things:

The nature of the arrangement between VMUG and DTUC is simply a landing page that links to all the community sites that are based around technologies in Dell’s portfolio. I hear that there was no procedural change to VMUG business, so the board of directors didn’t even need to vote on it.  If this is the case, then the announcement was WAY over promoting the relationship, much to VMUG’s own detriment. However, I’ve seen nothing to suggest this isn’t special treatment for Dell because they now own the majority shares of VMware.  There are plenty of other companies out there who have strong (possibly stronger) business relationships with VMware, who could benefit from a tight User Group relationship. If it’s really ONLY about awareness to other communities (which is great), why not do the same with HPE, NetApp, Lenovo, AWS, or Cisco communities? Why suggest that this will allow co-located VMware and Dell User Group meetings? What about a relationship with VTUG? What about connecting the VMUG community into the Microsoft and Citrix communities since both of these companies have lots of customers running their products on VMware?  Why not work with all these communities to create a truly independent user community to help broker all users to all communities that are relevant to them? If VMUG is truly independent from VMware and VMware is truly independent of Dell, and their intention was to best serve the individual members, why would any of these be considered crazy?

Now, don’t get me wrong, I don’t think the concept of including VMUG in the DTUC is inherently wrong, it’s actually a great idea (for Dell) to allow the Dell communities to ride the coattails of VMUG’s success. As much as all of us converged and hyperconverged companies like to talk about eliminating other vendors from the data center, there’s always going to be a mix of technologies and vendors.  Helping users connect to other relevant communities is a great goal, but that promise falls completely flat if VMUG only does it with Dell communities, because it clearly shows favoritism.  Even if this whole situation was started by Dell (which I have indications it did), VMUG should be actively reaching out to other vendors to do similar relationships, if only to show they’re not giving Dell special treatment.  If this move is so exciting and beneficial to the “advancement and development of new and existing communities that support our members and their organization’s needs,” they why wouldn’t VMUG be equally eager to have similar relationships with all the other vendors listed above?  Of course, this assumes that there is true independence from VMware and Dell, and VMUG is going to work in favor of members even when it might partially conflict with VMware and Dell’s interests.

I see this announcement as one of the worst PR moves in recent memory (all government machinations aside).  I mean, seriously, what did VMUG HQ expect? They announced that the new majority owner of VMware, who people were already worried about mucking around with our favorite vendor, was a new umbrella over VMUG. And it was done without input or even warning to those leaders who keep the community together for them.  And it was literally advertised as “VMUG is now a part of Dell Technologies User Community,” indicating that it was an ownership change! 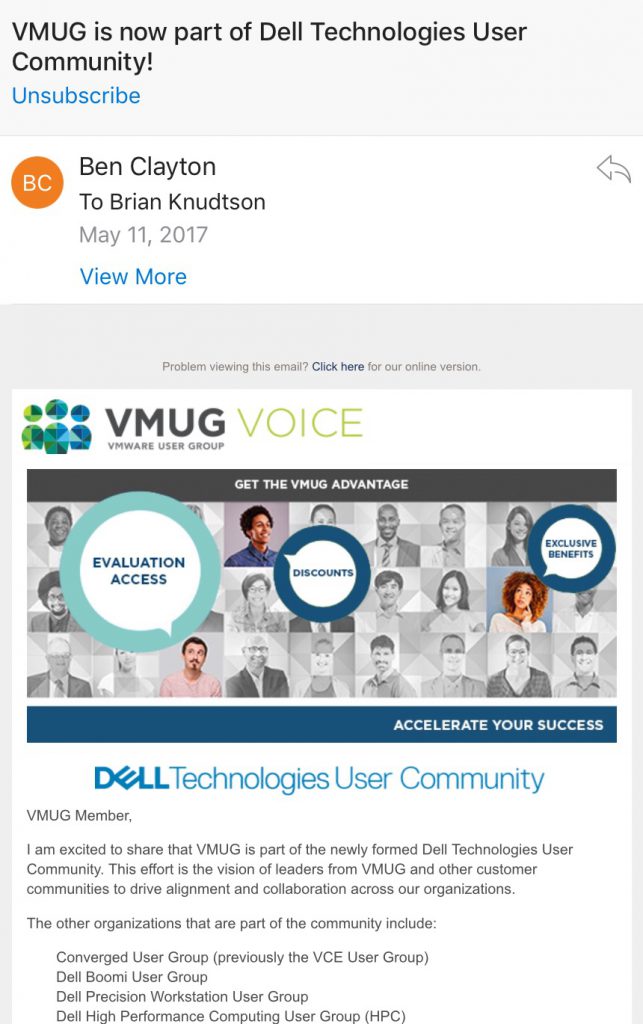 I do have to admit I feel most sorry for Ben Clayton in all of this.  Many of the mistakes that VMUG have made happened or were started prior to his tenure as VMUG President.  I’ve known Ben personally for many years, and I know he understands and wants to fix many of the problems that VMUG has. One advantage of all this: he now has clear mandates and the heat to make real change.

He has some serious challenges to deal with, though. I’ve heard long and constantly that VMUG has become too money-driven.  There’s a lot of duality with the introduction of VMUG HQ. The explosion in UserCon events probably wouldn’t have happened without a more formal structure to VMUG.  UserCons are mostly run by VMUG HQ, which is good for some of the events. On the other hand, some of the bigger ones wish that VMUG HQ would get out of their way.  Outside the UserCons, most local chapter meetings are running more or less independent, though some get more help from VMUG HQ than others. Some have told me that they see the potential advantages, but they never realize these advantages in practice and definitely feel the restrictions that come down from VMUG HQ (the black listing of some vendors, for example). Overall, most of the leaders I talk to (including those running UserCons) feel that VMUG HQ is a money-making scheme that insulates VMware from the local chapters, while also giving VMware more (masked) control, and ultimately providing very little relative value back.  Especially when decisions are being made with zero input from members and leaders and very little transparency is provided into the operations of the organization.

All of this comes at a bad cross-roads for our community as a whole. Sponsors are spending less on events they can’t strongly tie business to.  I see this through VMunderground, conversations with VMUG and other community event leaders, and from working at a vendor myself.  As VMware grows and increases its portfolio, it starts to compete with previously strong partners.  Also, both members and leaders are starting to focus on other technologies.  Some of VMware’s products are hands-down best-in-class, but really aren’t as exciting as they used to be. Other products are interesting only because they’re owned by VMware. As AWS, Docker, and other fast growing technologies/companies gather more mindshare, sponsoring vendors (which, quite frankly, have been the monetary lifeblood of VMUG) are focusing less and less on VMware’s community.  These items are conspiring to cause a lot of stress on the community and will likely cause VMUG to continue to struggle with attendance and income.

The VMware community, including the VMUG leaders, have a very strong sense of independence.  To some extent, the current situation is a sign that they are the proverbial frogs that have been in a slowly boiling pot.  But they’ve been awakened to the reality that they’re not as independent as they thought they were and have made it clear they want to be.  Now the pretenses are gone and the community has a new perspective on VMUG, and it doesn’t seem to collectively like what it sees. To maintain the size and success it has grown used to, VMUG is going to need to respond boldly and quickly. To that end, here’s a quick list of items VMUG can implement that would help re-establish faith (this is a quick list I threw together, so I’m happy to hear what others would add):

This has been such an amazing community, I’m really hoping it is able to evolve and continue.  VMUG have the opportunity to make this change happen internally, but if it doesn’t then the change will happen elsewhere and VMUG will be left behind.